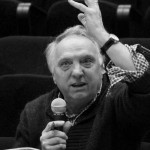 Adriano Guarnieri completed his musical studies with Giacomo Manzoni at the Bologna Conservatory. To date, he has written around one hundred compositions including orchestral and chamber works, as well as live electronics. His Saint Matthew Passion had its world premiere at La Scala in Milan, and his cantata Pensieri Canuti was performed at the Salzburg Festival. Guarnieri composed nine lyric operas, of which Trionfo della notte and the opera-video Medea both won the Abbiati award in 1987 and 2002 respectively. His Infinita Tenebra di Luce made its world premiere as part of the Maggio Musicale Fiorentino 2018 season. Guarnieri has taught composition at the conservatories of Florence and Milan.