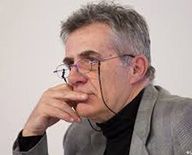 Angelo Foletto is a journalist and music critic of La Repubblica, he has been President of the National Association of Music Critics since 1996.
He currently teaches at the Conservatory and at the Holden School and is a regular contributor of articles to the Adige, Suonare News and Classic Voice.

He was Deputy Director of Musica Viva and editor of the Classica encyclopedia (published by Fabbri). He created the series ‘Prima delle Prime’ and he also writes and presents ‘Domenica in Concerto’. He writes and broadcasts programmes about music on Classic TV, RTSI, Radio Popolare and Radio 3.
He works with music and News organizations and the Fondazione Coro Sat in Trento. His publications include the book ‘Carmen, a guide to the Opera ‘ among others. He has written about Carlo Maria Giulini after lengthy interviews with him, and also about Daniele Lombardi in a monograph (Verso un autoritratto). He is President of the Amici della Galleria D’Arte Moderna of Villa Reale Onlus and of the Cultural Association ‘Achille Foletto’ at the Foletto Museum in Ledro – Pieve (Trento).